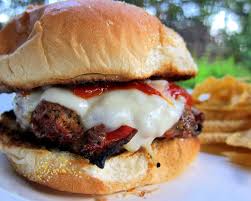 You’re stood in the shower at your local gym when you overhear one of the extremely large fellows roar:

“Nah, I can have whatever I want because I’m on a dirty bulk!”

Once you realise he’s talking about his diet you find yourself thinking:

“What on earth is dirty bulking and how can I learn more about this wondrous diet that’ll let me eat whatever I want?”

Sure, he’s not in great shape. But he is BIG. A kind of splodgy, flabby big. But he’s definitely bigger than you are. Which probably means he’s stronger.

You’ll begin to convince yourself that this sounds like a fantastic idea.

Well, you’ve always struggled to put on weight when you’re trying to build muscle, haven’t you?

As a hard-gainer, this sounds like the perfect solution.

You resolve to start immediately and grab yourself a nice, juicy burger on your way home from your workout, safe in the knowledge that it’s all part of your training regime now.

But before you take that first bite, you may want to read the contents of this article very carefully, because whatever seems too good to be true is oftentimes exactly that.


So, over the course of the next 5 – 10 minutes, we’ll discover if committing yourself to a dirty bulk falls into that cruel category of over-promising and under-delivering.

What exactly is a dirty bulk?

In order to determine what a dirty bulk is, it may be a good idea to ascertain what bulking means in the first place.

Let’s hand-over to Wikipedia to tackle that:

“The bulking phase entails remaining in a net positive energy balance (calorie surplus). The amount of a surplus that a person remains in is based on the person’s goals, as a bigger surplus and longer bulking phase will create more fat tissue. The surplus of calories relative to one’s energy balance will ensure that muscles remain in a state of anabolism.”

In English, that means that you eat more calories than your body actually needs (the amount needed to do so varies person-to-person). And during this period of being in a calorie surplus, you will gain weight.

Some of this weight will be fat (this is inevitable), but more importantly, it ensures that your body remains in an anabolic state i.e. you will be increasing your muscle-mass at a molecular level.

And basically, when combined with strength training, you will be achieving hypertrophy, which means your muscles get bigger and stronger.

To dedicate yourself to a dirty bulk is to eat an excessive amount of calories every single day. So far, so consistent with a bulk by any other description – dirty or otherwise, right?

Well, the derivation of the ‘dirty’ tag comes from the fact that you don’t bother to monitor your macro-nutrient intake (your proteins, carbohydrates and fats) and actually, most people on a dirty bulk don’t bother to filter any of the foods they consume whatsoever.

So long as they’re in a calorie surplus, they’ve hit their target.

Sounds absolutely amazing, doesn’t it? Why on earth aren’t we all doing this if it’s the route to muscle-bound marvelousness?

Well, because it isn’t. Not really.

Allow us to be the bearers of bad news…

“You’re gonna need a big appetite if you want to get yourself some big muscles.”

It’s the advice you hear echoing around gyms and weight-rooms up and down the country.

And while it’s true, to a certain extent, somewhere along the way the message seems to have become a little distorted, leading to confusing advice and pipe-dreams of eating everything in sight to become muscular.

What are some good dirty bulk foods?

Those are just a handful of genuine suggestions found on bodybuilding forums.

That is not to say they’re all terrible suggestions (though you may want to avoid loading up on the pizza – more on that in a minute), it’s just that the whole idea misses the point somewhat.

But were you aware that this healthy-looking slab of beef also contains 32.25g of fat – 12.7g of which is saturated fat? Better stump-up the cash for the healthier fillet-cut, next time.


And let’s be honest, steak is probably the healthiest item on that list. The amount of saturated fat in your average 14” pizza is an artery-clogging 38g!

Sure, this will boost your calorie intake for the day; no sweat. But the long-term damage you’re doing to your health by following such a diet, even for a short amount of time, is devastating.

What do the results of a good dirty bulk look like?

With an increased calorie intake, your lifts are going to get bigger.

As long as you engage in progressive overload, then it’s very likely that all of the numbers on your big lifts (deadlift, squat, bench and overhead) will go up.

And that means all of the numbers on your other lifts are likely to go up too.

But at what cost?

The caveat is that you will gain fat. And probably, a lot of it.

Let’s face it, you probably go to the gym for one of these three reasons:

With a dirty bulk, you’ll probably achieve number one on that list.

But will it be worth it if the fat you’ve accumulated hides all of the muscle you’ve built, making you look soft and saggy?

And, more importantly, if it jeopardises your long-term health by negatively effecting your cardiovascular and endocrine systems, is it a sacrifice worth making?

Would you consider the ability to lift heavier weights now more important to you than having a body that will take you healthily into your golden years?

It seems a dramatic comparison to draw, but a lifestyle that involves an unhealthy diet is no joke.


Perhaps what most people fail to consider is the fact that the nutritional value of food extends far beyond the macronutrients that are scrutinised in order to hit their calorie goals.

The food we eat provides a vital source of micronutrients (vitamins and minerals) that our body relies on to function properly and fight disease.

And the major issue with eating fast-food, sugary drinks, processed foods and other tasty treats is that they are largely devoid of important micronutrients, despite being high-calorie.

Looking good in the mirror is probably achievable by eating a diet consisting of such foods. But if your body is starving for micronutrients, which has led to hormonal imbalance and a suppressed immune system, will future-you thank you for your efforts?

In addition to this, rising fat levels actually causes muscle growth to slow down.

So, as you become more resistant to insulin, your body receives this trifecta of bodybuilding bludgeoning:

That then gets followed up with the one-two combo of:

To summarise, you’re going to get fatter, hold on to that fat longer and build less muscle.

With such evidence, it seems cavalier, and perhaps senseless, to even consider a diet that disregards the importance of intake control and closely-monitored macronutrient consumption.

Are there any positives to dirty bulking?

There are, of course, a few arguments that can be made in favour of dirty bulking.

This kind of fad doesn’t gain traction by being a no-holds barred collection of non-stop negatives.

The most compelling argument is probably the fact that it is a very cheap diet in comparison to purchasing healthy, organic produce.

On a calorie-to-calorie comparison, junk food is usually considerably cheaper than its healthy counterpart, simply because it is generally served in larger quantities, is high-calorie and very low-quality.

There is an argument that it is far more convenient too.

In an age where spare time is a rare commodity for all, finding time to plan, purchase and prepare three healthy meals a day can often take the back-seat if you happen to drive past a certain set of golden arches every evening after work.

And of course, you can be sure that there is no chance of you missing your target by going under your calories for the day, which can offer peace of mind, in a strange sort of way.


How about the science? Is there any evidence to support it?

To an extent, the fundamentals of dirty bulking are supported at a scientific level when applied to building muscle-mass.

As discussed earlier, you want your muscles in a state of anabolism to encourage hypertrophy, and being in a calorie surplus does exactly that, regardless of where those calories come from.

Anecdotal evidence too, should not be entirely ignored, and traditional bulking methods that have been executed for decades maintain that, to achieve maximum muscle growth, excessive calorie intake is an absolute necessity and gaining fat is merely part of the deal.

Is that the whole story? Are there any alternatives?

While old-school practitioners are correct in claiming that you generally need to eat more if you are to achieve the goal of building muscle efficiently, there are methods that allow you to control – to some degree – your body fat percentage simultaneously.

And this in turn allows you to increase your size without jeopardising your health.

By adopting the rather originally named ‘clean bulk’.

What is Clean Bulking?

As its name seems to suggest, clean bulking is a method of dieting that entails:

The aim of bulking is to put your body in a state where it can increase strength and muscle-mass.

By eating healthy foods to hit your daily calorie surplus and achieve this state, you will greatly minimize the fat intake while simultaneously loading your body with all of those lovely vitamins and minerals it relies so heavily upon.

More ‘healthy’ eating? Where’s the fun in that?

While it may sound boring, on the surface, there is a small margin of wiggle room with a clean bulk. (Besides, who told you that getting the body of your dreams would be plain-sailing and fun? Sorry to inform you of this, but they lied!)

A target would be aiming to get 80% – 90% of your calories from nutritious foods, such as:

With the remaining 10% – 20%, feel free to indulge a little, safe in the knowledge that you aren’t likely to overeat when you have such a small window to work within.

That opportunity to treat yourself should satisfy any cravings you have, while your satiety levels are handled by the bulk of your healthy food intake.

And if you’re still struggling to hit the target, even with all of those options, you could always brave the infamous olive oil shooters!

How many calories is enough?

In terms of calorie consumption, it’s tempting to overshoot the mark, just to make sure you aren’t accidentally going under and effectively turning your bulk into a maintenance diet.

So now you know…

Bulking is a controversial area of bodybuilding, often derided as being bro-science over hard evidence and empirical data.

And this was almost certainly accurate, in decades gone by.

Fortunately, there have been a multitude of studies that support the fundamental principles of bulking which have opened up the opportunity to do it in a healthy manner.

Dirty bulking certainly served its purpose for a while, and though it still has its supporters, it is no longer the recommended method of achieving increased size and performance.

Though there’s nothing that can be done about the added expense of the healthy route – just consider this your six-pack tax.

Have you ever succumbed to temptation and undergone a dirty bulk diet? Do you agree that the ‘clean’ variation is far better for your long-term health? Let us know your thoughts below.